Ever feel like “You’re damned if you do, damned if you don’t?” I think many baby boomers may share my confusion, especially in the ever-broadening realm of often conflicting health information. And if it’s not conflicting, it raises questions about “How the heck do I deal with this one?”

Case in point: According to a new study to be published next week in the journal BMJ Open, sitting for more than three hours a day can shorten your life expectancy by two years—even if you’re physically active at another time during the day and even if you don’t smoke. You thought you were doing great, right? 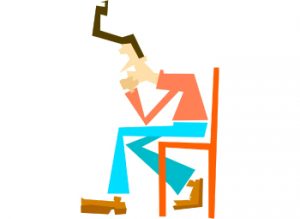 The study from self-reported data also found that reducing time in front of the tube can increase lifespan—so less TV, please. I’ll bet the same principles apply to locking on to your computer screen, don’t you?

Researchers noted that the average American—that’s you and me—is sedentary for more than half of our day. Experts asked for comment on this story by various publications agreed that getting one’s “30 minutes of recommended exercise daily” isn’t enough to snuff out the sedentary lifestyle that consumes us in 2012. What to do?

Move it or lose it

Get up several times during the hour and just move for a few minutes—at least once every hour or two. Yes, do go get another cup of coffee, or take your phone and earpiece along for the chat as you circle the office. If you’re really serious, buy or build a treadmill desk or walk station. I’m betting that in coming years, these will be “the norm.” Standing, in and of itself, is better than sitting, said the researchers, but doesn’t substitute for “real” physical activity.

Be reminded that just walking more reduces rates of cancer, stroke, heart attack and type II diabetes and it helps control weight. Late last year, another study from the American Institute for Cancer Research revealed lack of physical activity is linked to increased risk of colon cancer and breast cancer. Other unrelated research reveals similar findings, but remember—we do have a choice to sit or not.

I’ll stop now. Time to walk around the house!